Justice Alito has strong views about pronouns (and gender). 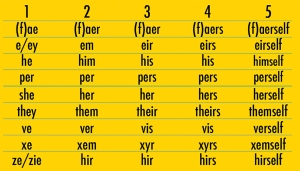 Justice Samuel Alito warns that Bostock not only opens up bathrooms and locker rooms to sexual predators, it runs afoul of the First Amendment by forcing people to use gender pronouns against their will.

Alito implies that somehow this deluge of gender pronouns, now tacitly approved by the Supreme Court, will destroy the English language as well as the American workplace.

I’m sure you must be deeply worried about this possibility, aren’t you?

The analysis I quoted above comes from The Web of Language, Dennis Baron’s wonderful linguistics blog. In case it isn’t obvious, Baron is definitely not endorsing Alito’s dissent in this important case. Baron goes on to say this:

Alito is wrong about the dangers of opening up bathrooms and locker rooms to those whose gender doesn’t match the traditional masculine-feminine binary: trans persons have frequently been the victims, not the perpetrators, of violence.

He’s also wrong about pronouns, and so here’s a little grammar lesson for him.

You can go on to read the entirety of Baron’s short post. I recommend that you do so. Bostock is an important case, not just because of its content “guaranteeing queer, trans, and nonbinary people equal treatment in employment” but also because the opinion was written by Justice Gorsuch of all people. [Autocorrect just changed “Gorsuch” to “Grouch,” so I had to change it back!]

The post in The Web of Language is a great combination of linguistic and social viewpoints. I don’t often write about sociolinguistics — as this subfield is called — but it’s fascinating and of much more general interest than most branches of linguistics. So go read Baron’s post: you’ll enjoy it and you’ll learn something.

‹ Tavolo is back!
Think of the veterans. And think of the cats… and dogs. ›